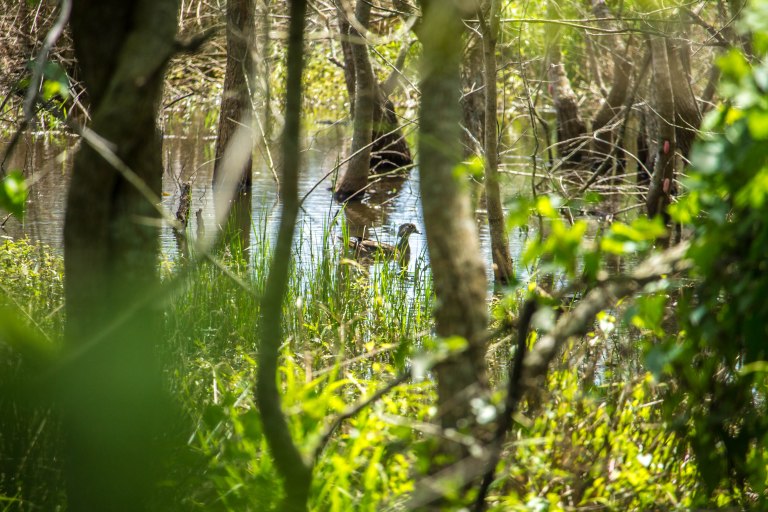 Far from the best photo I have ever taken BUT – I was so excited to spot a female Wood Duck at El Franco Lee Park yesterday! They are super secretive and so finicky. It was nearly impossible to photograph because of the brush and trees blocking my view. Did not see any males. I did see a lot of Blue Winged Teals, American Coots and tons of wading birds. Was hoping to spot some warblers but all I saw was Yellow-rumped. Migration season does seem to be moving a bit slow.

So yes, sometimes I have great days birding, learning lots of interesting things, just being in total and complete awe of nature, which doesn’t always equate to great photos, and that is okay. It adds to the element of fun and appreciation when I do score a good photo. I did see an amazing variety of Dragonflies and caterpillars which were everywhere. Probably the highlight of my day was watching an old Osprey flying overhead, then resting on a perch in the middle of the lake. I also saw what I believe was a juvenile Little Blue Heron catch a frog. My 250mm lens just did not have the reach I needed for a crisp photo, but it was fun to watch anyway. What the heck, here’s another birding b-side:

Be warned, lots of snakes. Pretty sure the ones I saw were Broad Banded and not poisonous but definitely heed the warnings on the signs. If anyone can confirm this is a Broad Banded Water Snake please let me know in the comments!

This is a text widget. The Text Widget allows you to add text or HTML to your sidebar. You can use a text widget to display text, links, images, HTML, or a combination of these. Edit them in the Widget section of the Customizer.
Loading Comments...
%d bloggers like this: